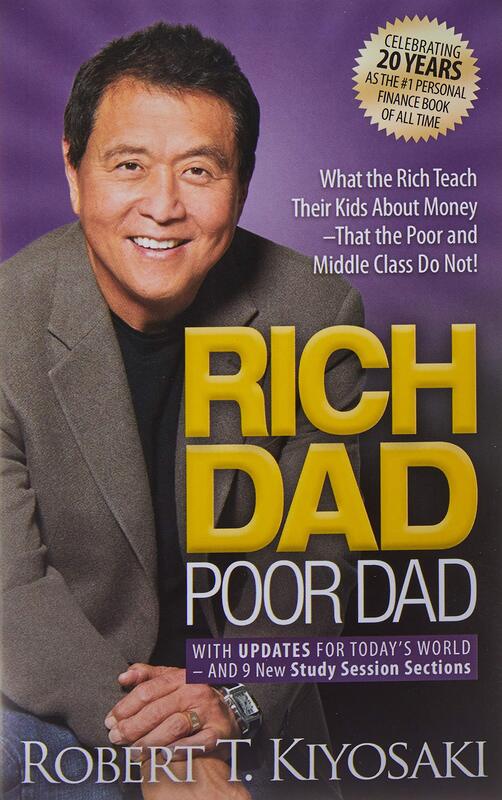 Book – Rich Dad Poor Dad (What the Rich teach their kids about money, that the poor and middle class do not)

Whether you just started working, working for a while or working for a long time and don’t seem to be getting ahead financially, Rich Dad, Poor Dad will help you understand the reason, and provide guidance to gain financial independence.

With perspectives on money and investing that often contradict conventional wisdom, Robert has earned an international reputation for straight talk, irreverence, and courage and has become a passionate and outspoken advocate for financial education.

He claims that one of the reasons the rich get richer, the poor get poorer, and the middle-class struggles in debt are that the subject of money is taught at home, not in school.

Rich Dad, Poor Dad shares an unconventional yet powerful perspective to look at money, how it works, and we must make it work for us, rather than working for it if we ever want to attain financial well-being.

In this best-selling book, he shares what he learned from his two dads, One rich (His friend’s Dad) and one poor (His real dad) starting from age nine. Though both were successful in their respective work, one flourished financially and one struggled.

Robert claims money is one form of power. But what is more powerful is financial education. Money comes and goes, but if you have the education about how money works, you gain power over it and can begin building wealth.

The book is about mainly six lessons he learns from his rich dad, which were repeated to him over 30 years in various forms. I loved the way Robert turns complex topics into simple way with simple pictures and words, which makes learning fun, effective and memorable.

Here are Excerpts From Each Lesson

Robert doesn’t claim these lessons to be answered, but guideposts that will assist you and your children to grow wealthier no matter what happens in a world of increasing change and uncertainty.

Lesson # 4 – The History of Taxes and The Power of Corporations –

The primary difference between a rich person and a poor person is how they manage fear.

Few Suggestions to Get Started

3) Take classes, read, and attend seminars – Robert suggests that one should take classes, read more books, and attend a seminar to constantly learn. Robert claims that he is wealthy and free from needing a job simply because of the courses he took.

I have also created video of few quotes from the book – Hope you like it. Please do subscribe to my You Tube channel – Myread4change

Rich dad, poor dad is one of the best books on money. It will give you a fresh perspective on money and encourage you to move in the right direction of wealth building.

If you have money concerns and are open to digging into the subject of money, this book will lay a great foundation.

You may download Rich Dad Poor Dad E-book for free here. If you like this book, you will like The Richest Man in Babylon and The Millionaire Next Door as well.

Thank you for Reading.