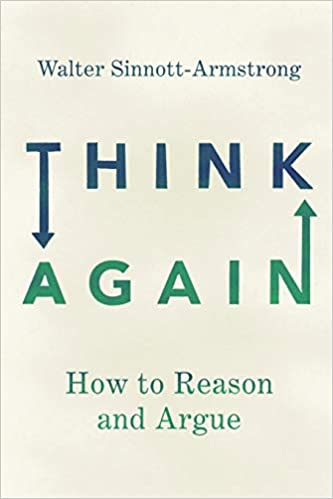 Book – Think Again, How to Reason and Argue (Summary)

Word Argument has a very negative connotation to it. Like it quoted by many famous authors.

“I have concluded that there is only one way under high heaven to get the best of an Argument, and that is to avoid it. Avoid it as you would avoid rattlesnakes and earthquakes” – Dale Carnegie

“Arguments are to be avoided, they are always vulgar and often convincing” – Oscar Wilde

Many theories have evolved with arguments and argument in itself is not good or bad, however how we conduct an argument, its purpose and its participants direct its connotation.

The author of Think again differs and claims that “although we cannot always reason with everyone, that limitation does not show that arguments and reasoning are not useful”

Most of our arguments are about converting people to our way of thinking or to proving a point. Think Again teaches us to argue for understanding others’ positions and give the reason for our position rather than converting them.

He further adds that many people have stopped giving reasons of their own and looking for reasons for opposing positions. To broaden perspective One should assert less and question more.

The book goes into many details, though the author’s claim details in the book about argument are only the scratch of the surface.

PART I – Why to Argue

The author claims that unless we argue (discuss) with people with beliefs contrary to ours, we will not know more than we know and limit our growth.

It means different groups of people have different views. Though, even in the same group people vary enough on many things. Hence, many other factors need to consider for polarization like,

5) Judging instead of clarifying –

What We can Gain from Argument

when we are open to reason with someone holding opposite views we can learn a new perspective and then it’s up to us whether to change our position or not. But if we focus on winning or beating someone we are close to reason and we won’t learn anything more than we know.

When we are open and ask for the reason, we show respect to other person and their view and others will be more considerate to listen to our reason. All of us like to be heard and ask reasons for our position.

Apart from showing and gaining respect, we learn humility if we are open to reason and ask appropriate questions. The author suggests asking ‘HOW’ rather than ‘WHY’.

He claims that when people are asked ‘HOW’ like how their proposal works needs them to layout mechanism and while doing that, many realize their position may not be as strong as they like to think and become open to alternative views with humility.

As both parties have a reason for their position and what they value most, it will be much easier to draw the middle path. Though no compromise is perfect, in most cases well-reasoned compromise can be more constructive and good for all, who are affected by it.

PART II – How to Argue

What is not an argument is good to point to start understanding what argument is.

What Argument is not –

The author explains through the Monty Python video what argument is not. It’s not abusing, physical or verbal fights, and denials. We can not simply deny someone’s claims without reasoning.

The reason is required in all arguments, however, which kind or kinds of the reason is a feature, not a bug. Reasoning can be related to believing something after knowing facts that we didn’t believe before.

PART III – How Not to Argue

As much as we think or are sure of our position, there are things we must avoid to blow any arguments out of proportion.

Whether we like it or not, there are times we must discuss, whether to convey our idea or explore other perspectives, facts about something, and knowing how to argue is of great significance. Think again will turn you into a good arguer.

Wish you a great outcome with all your arguments.