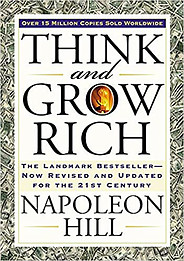 One of the best-selling classic books in the self-help domain. Quotes and many lines are as inspiring and helpful as principles shared in the book.

Here are a few inspiring, uplifting quotes and lines from the book.

1. “Poverty needs no plan. It needs no one to aid it because it is bold and ruthless. Riches are shy and timid. They have to be “attracted”

2. “Opportunity has a sly habit of slipping in by the back door, and often it comes disguised in the form of misfortune or temporary defeat”

3. “One of the most common causes of failure is the habit of quitting when one is overtaken by temporary defeat”

4. “There are no limitations to the mind except those we acknowledge. Both poverty and riches are the offspring of thought”

5. “Self-mastery is the hardest job you will ever tackle. If you do not conquer self, you will be conquered by self”

6. “You may see at the same time your best friend and your greatest enemy, by stepping in front of the mirror”

7. “The world has the habit of making room for the man whose words and actions show that he knows where he is going”

8. “It was a great surprise to me when I discovered that most of the ugliness I saw in others, was but a reflection of my own nature”

9. “Put your foot upon the neck of the fear of criticism by reaching a decision not to worry about what other people think, do, or say”

10. “A man’s alibi is the child of his own imagination and it is human nature to defend one’s own brain-child”

11. “The starting point of all achievement is DESIRE. Keep this constantly in mind. Weak desire brings weak results”

12. “Set your mind on a definite goal and observe how quickly the world stands aside to let you pass”

13. “Every adversity, every failure, every heartbreak, carries with it the seed of an equal or greater benefit”

15. “When one is truly ready for a thing, it puts in its appearance”

16. “Every failure brings with it the seed of an equivalent success”

17. “No one ever is defeated until defeat has been accepted as a reality”

18. “All impulses of thought have a tendency to clothe themselves in their physical equivalent “

19. “Faith is the only known agency which will give your thoughts a spiritual nature. FAITH and FEAR make poor bedfellows. Where one is found, the other cannot exist”

20 “Do not wait. Start where you stand, work with whatever tools you may have at your command, and better tools will be found as you go along”

21. “One of the blessings of maturity is that it sometimes brings one greater courage to be truthful, regardless of what those who do not understand, may think or say”

22. “When a man really DESIRES a thing so deeply that he is willing to stake his entire future on a single turn of the wheel in order to get it, he is sure to win”

23. “When riches begin to come they come so quickly, in such great abundance, that one wonders where they have been hiding during all these lean years”

25. “Every person who wins in any undertaking must be willing to burn his ships and cut all sources of retreat”

26. “Our only limitations are those we set up in our own minds”

27. “FAITH is a state of mind which may be induced, or created, by affirmation or repeated instructions to the subconscious mind, through the principle of autosuggestion”

28. “FAITH is the element, the “chemical” which, when mixed with prayer, gives one direct communication with Infinite Intelligence”

29. “FAITH is the element which transforms the ordinary vibration of thought, created by the finite mind of man, into the spiritual equivalent”

30. “Ideas can be transmuted into cash through the power of definite purpose, plus definite plans”

31. “Temporary defeat should mean only one thing, the certain knowledge that there is something wrong with your plan”

32. “No man is ever whipped until he QUITS—in his own mind”

33. “Education consists, not so much of knowledge, but of knowledge effectively and persistently APPLIED. Men are paid, not merely for what they know, but more particularly for WHAT THEY DO WITH THAT WHICH THEY KNOW”

34. “Before you can control conditions, you must first control yourself. Self-mastery is the hardest job you will ever tackle. If you do not conquer self, you will be conquered by self”

35. “You may see at the same time both your best friend and your greatest enemy, by stepping in front of a mirror”

36. “PROCRASTINATION, the opposite of DECISION, is a common enemy which practically every man must conquer”

37. “Tell the world what you intend to do, but first show it. This is the equivalent of saying that “deeds, and not words, are what count most”

38. “Be PERSISTENT no matter how slowly you may, at first, have to move. WITH PERSISTENCE WILL COME SUCCESS”

39. “Riches do not respond to wishes. They respond only to definite plans, backed by definite desires, through constant PERSISTENCE”

Hope these quotes and lines inspire you in some way. Feel free to share this post of quotes with anyone you feel be benefited and inhale inspiration, uplift their day to persist in their quest.

Do let me know your favorite quotes be it from this or any other book in the comment.

Wish you a life full of bliss. Thank you for reading.