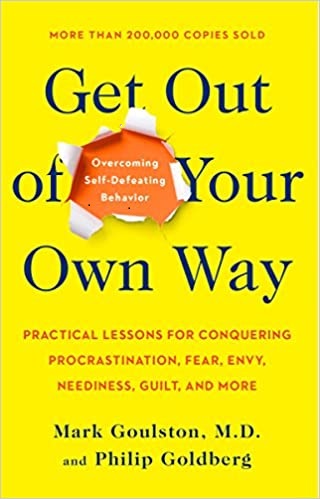 Book – Get Out of Your Own way

Self-defeating behavior occurs when we fail to learn the lessons that life tries to teach us.

Get Out of Your Own Way

Have you ever uttered statements like “I can’t believe I did that again”, “I should have known better”, and “I’m my own worst enemy” before? If yes, then you aren’t alone.

Most of the time it is us than others who get in our own way and deprive ourselves of the good life we often think about.

Nothing drives us crazier or makes us hate ourselves more than to realize we’ve been keeping ourselves from gaining love, success, and happiness.

Get out of your own ways book shares 40 self-defeating behaviors and suggests ways to overcome them so we can lead the life we expect and deserve.

The author claims that reading this book and implementing the suggestions will help you become your own best friend than your worst enemy.

I noticed myself nodding while reading many of the behavior and found suggestions helpful for overcoming the self-defeating behaviors.

Here are a few Self-defeating Behaviors.

There are many quotes, and I like this one the most.

Procrastination is the art of keeping up with yesterday.

Expecting Others to Understand How You Feel –

No human being can really understand another, and no one can arrange another’s happiness.

Waiting Until It’s Too Late –

Saying Yes When You Want to Say No –

To be wronged is nothing, unless you continue to remember it.

Always Having to Be Right –

It wasn’t until quite late in life that I discovered how easy it is to say ‘I don’t know.‘

Trying to Change Others –

It’s not a slam at you when people are rude, it’s a slam at the people they’ve met before.

Great works are performed not by strength but by perseverance.

Not Asking What You Need –

I have also created a video of a few quotes from the book. Hope you like it. Please do subscribe to the YouTube channel for self-help books quotes- Myread4change –

Get out of your own way book will help you identify your self-defeating behavior and will also guide you in overcoming them.

Hope this book summary helped you someway. I would appreciate a few words in the comment.

Wish you the strength and courage the become your best version.

1 thought on “Get Out of Your Own Way Book Summary”